Even with two monitors, I can get so many windows open that it is annoying when I need to flip between windows to figure something out. I frequently need to look at several pairs of windows--an RStudio window and a Firefox window, a TeXmaker window and a Firefox window, an Excel window and an Adobe Reader window, a Windows 7 virtual machine with a client running and an Ubuntu virtual machine with a web service running--the list of window pairs is quite long. I need to be able to quickly switch between pairs of windows without going through multiple steps to minimize and maximize windows to get the ones I need on top and sized to see them at the same time. Fortunately, this is possible in Windows, Linux and OS X--the three operating systems I use daily. In Unix, Linux and Mac systems, the virtual desktops that are part of the OS have provided this for years, but this is a not base feature on Microsoft Windows until the introduction of Windows 10.

Fortunately, for older versions of Windows, there are a number of add-ons for Windows that provide this function; I use Desktops 2.0 on both Windows 7 and Windows 8.1. Desktops 2.0 can be downloaded from the Sysinternals web site. Like the capabilities provided in Linux and OS X, Desktops 2.0 provides four virtual desktops where you can have groups of windows open on each desktop and switch between desktops. The remaining sections discuss how to use virtual desktops in the three major operating systems. For Linux, I give instructions for Ubuntu, but the same general steps apply for the other major Linux distributions. See the sections that follow for how to use this on your operating system:

Microsoft finally provided a native virtual desktop feature in Windows 10 and clearly learned from Apple, Linux and from the earlier Desktop 2.0 add-on. The Windows 10 implementation is probably the easiest to implement and learn of all of the solutions. Figure 6 shows a windows desktop; to use virtual desktops, click on the little three-box icon immediately to the left of the Internet Explorer icon in the tool bar. This will bring up snapshots of all of the active virtual desktops as shown in Figure 7. To add an additional desktop, just click on the "New Desktop" text in the lower right corner. You can open multiple windows of a program in each virtual desktop–something that you could not do in Desktop 2.0. You can’t move windows between desktops as you can in Linux, but you also aren’t limited in the number of desktops.

There is one setting in System->Settings->Virtual Desktops that I changed: I chose to have it highlight applications that are open on all desktops rather than just the current one, as this makes it much easier to switch between desktops and makes it work much more like Ubuntu.

For Windows, there are a number of add-on programs that do virtual desktops, but I use Desktops 2.0 primarily because it is provided by a subsidiary of Microsoft. It installs like a normal program. To use Desktops:

Desktop 2.0 is somewhat more restrictive than the OS X and Linux implementations in that you cannot move windows between desktops.

Ubuntu and Other Linux Distributions

Virtual desktops are built in to Ubuntu, and are accessed through the desktop icon on the task bar on the left side of the screen, as shown in Figure 10. Selecting the task bar brings up thumbnails of all of the virtual desktops, although these aren't really thumbnails, as they consume the whole display. You can move windows between desktops and from one monitor to the other within a desktop. Figure 11 shows the super-sized thumbnail displays. This is probably the easiest to use of the three virtual desktop implementations.

<figureid="fig10"> Figure 10. The virtual desktop icon is on the task bar immediately above the CD icon. 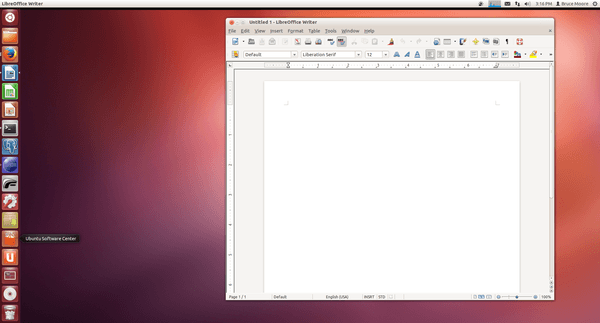 This allows capturing some screenshot images that are otherwise difficult to capture.

Image sizes were standardized using the Imagemagick convert command in a bash script:

All images were compressed using the optipng command.