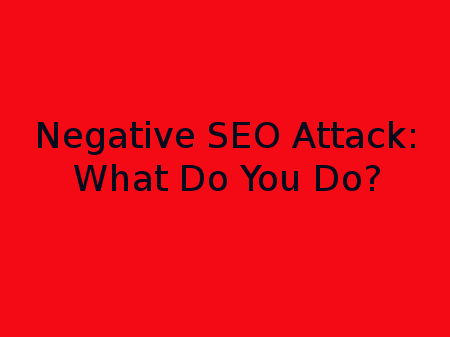 Negative SEO Attack–What Do You Do?

A couple of years ago, I (and all webmasters) got a lot of Google Analytics referral spam. It really angered me, so I wrote an article about every referral spam attack, and they actually ranked well when you did a Google query for these sites. Apparently, this annoyed someone in the referral spam world, as they mounted a negative search engine optimization (SEO) attack against my site. They put a couple of hundred spammy links out on a couple of web sites that have a low reputation and which have probably gotten manual penalties from Google. I honestly have not been paying attention to SEO for a while, and did not notice it for several months. In any case, it looks like Google’s algorithms are in fact pretty good at detecting negative SEO, because my site has not experienced a drop-off in search traffic that I cannot attribute to not putting new content out on a regular basis and a falloff in searches for the keywords that drive traffic to particular articles.

What Is a Negative SEO Attack?

A negative SEO attack is the process of trying to lower the Google ranking of a web site or a web page. Usually, this is done by putting a lot of low-quality links to the victim’s page in places that Google will penalize. Marie Haynes has a great Moz article negative SEO attacks and what to do; I won’t rehash it here, but I will show you what it looked like for my site.

I recognized the attack because recognizing and recovering from a negative SEO attack was discussed at one of the Dallas Interactive Marketing & Internet SEO/SEM Meetup that I attended on Keeping Google’s Fluffy Animals (and their Algorithmic friends) From Your Door.

Google Search Console is the place where you will see the attack when you look at the listing of links to your site. Figure 1 shows some of the links aimed at my site; how did I attribute these to a Negative SEO attack? First, all of the links in Figure 1 are all images copied from various web sites with links back to my site and the site itself appears to be aimed at people who mistype “blogspot” and instead type “blogqpot” for the URL. TCPIPutils.com shows private ownership, that the domain was in September, 2016, and that it expired on September 15, 2017.

The other site contained links that appeared to be machine generated blog posts that combined several blocks of standard text in different combinations, but with identical link text for all of the links to my site. The domain was private, but redirected to a domain that is registered in Egypt. The links to my site did not make sense, especially in the jumbled context of the “articles.”

One of the links to my site actually appears to be a blog where attackers are discussing sites that have posted articles about referral spam.

None of the spam links generate actual traffic to my site.

Google Search Console has a tool through which you can disavow links. Use it wisely, as you could accidentally tank your ranking if you disavow a really good link. Before disavowing links, I made sure that I did not get any traffic from any of the spam links. In Google Search Console, I exported all of the links that I wanted to disavow–about 15 files and then concatenated them with

Keeping up with Google Search Console backlinks should be at least a weekly part of your site maintenance work.