I upgraded to Joomla 3.9.13 and had problems with four of six sites giving the white screen of death. At the time of the upgrade, I also upgraded several plugins, including Akeeba Admin Tools, Akeeba Backup, OSMap and sh404SEF. The two sites that did not have problems did not have sh404SEF. I turned on Joomla and PHP debugging, and quickly learned that a fatal memory error was occurring, so I increased the maximum PHP memory allocation from 32M to 128M and all problems went away.

If you have problems with the white screen of death in upgrading to Joomla 3.9.13 or sh404SEF 4.17.0.3932, check your memory allocation first to see if this fixes the problem.

Moving a Joomla Web Site to a New Host

Moving a web site to a new hosting firm is a routine process if you take the time to prepare for the change. The article that follows talks about the steps in the process of moving a web site and transferring technical support responsibility.

It the decision is rebuild the web site, it is critical to capture ALL of the old URLs and set up redirects on the new site. If you do not, Google and Bing will lose all references to the site and your search engine ranking will start from scratch; if you are on page one, you will go to page fifty and work your way back up with the new URLs. This checklist does not cover the steps necessary to rebuild a web site as part of the hosting transfer process.

A friend recently bought a new computer to replace an aging Windows 7 machine, and asked what software I though he should load. It was easy to come up with a short list of programs that would satisfy the basic needs of most people. This list is heavily weighted to open source software and to programs that run on both Windows and OS X, there really are not any sacrifices to be made.

The easiest recommendation is for LibreOffice, an open source office package for word processing, spreadsheet, presentation, graphic design and light database work. It can read and write files in Microsoft Office formats, though because MS Office uses copyrighted fonts, the look will not be identical. Unless you need exchange a lot of business documents with other MS Office users, this will meet your office software needs.

Most people should have a couple of different browsers installed, as some web sites do not work with all browsers, and some browsers are not very good about privacy. I generally use one browser for sites where I am logged in and need to keep session cookies (Chrome), and another (Firefox) where I delete cookies and all history when I close the browser.

Firefox is generally the best browser for those who are security and privacy conscious. The default settings are pretty tight by changing the default search to DuckDuckGo, you can have a much more privacy than with Chrome or Internet Explorer with default settings.

Chrome is the most popular browser and has the fewest compatibility issues at this point in time, but the default settings are not very good from a privacy perspective. With default settings, Google will know pretty much everywhere you go and what you do.

Chromium is an open source distribution of Chrome, but with somewhat better default privacy settings.

Vivaldi is a browser that was developed and released by some of the team that originally developed Opera. Although I used Opera a lot, I have stopped since it was acquired by a Chinese firm. I am just less comfortable about privacy and security with software from Chinese companies, especially after what happened to StartCom after it was acquired by WoSign.

Good security today requires a that you never reuse a password, and this in turn requires that you use a password manager. There are many good candidates; here are a few that I have used.

Keepass is an open source password manager that is available on all major platforms. It does not provide cloud capability, which can be a plus or a minus depending upon your security philosophy; personally, I think lack of cloud capability is a plus as it requires a compromise of your machine to get access to the file and potentially to a key file that you can keep on a flash drive.

This is a popular option for OS X.

An old-fashioned desktop email client is still a necessity for times when you want to work with email but are not connected to the Internet. Thunderbird is open source and has some key features that are hard to find:

The only think it does not do is provide a multi-line display like the one in the Apple mail client.

Both Windows and OS X have built-in photo library managers, but if you want to retain the ability to move between operating systems, you may want to consider using DigiKam, an open source photo library manager. DigiKam is perhaps more complex, but it provides more control for facial recognition, file formats and a variety of other things.

It is really handy to have a messaging app that works on your phone, tablet and desktop and that provides end-to-end security. There are many candidates, but here are two that are widely used.

Signal is one of the most secure messaging systems and is now one of the most convenient with a desktop application. It is moderately widely used but is slowly growing in popularity.

Google Hangouts is no longer a stand-alone application, but is instead a browser extension for Chrome. It is available to anyone who has a Gmail account.

You will need something to read PDF files. Though there are clients that are better, it is always handy to have Acrobat installed.

Anyone who does work for a non-profit will need to write HTML for a blog post at some point, and for that you will need a simple HTML editor with syntax highlighting and spell checking. Advanced users will want more, but here some simple ones.

Bluefish is a very simple HTML editor with few bells and whistles, but it runs on Linux, Windows and OS X. It taks very little to figure it out.

Brackets is also a cross-platform editor like Bluefish, but has more options and capability than Bluefish.

Audacity is an audio file editor that will help you speed up or slow down audio without changing the pitch among other things. If you are doing video or podcast editing, this can be handly. It is cross-platform.

Family history (or genealogy) is a growing hobby with many for-fee packages. If you are looking for something that is free or cross-platform to enable cooperation with people running lots of different systems, GRAMPS is a good open source alternative.

Robocalls are a constant annoyance today; Network Caller ID (NCID)can turn you computer (and modem) into an effective call logger and blocker. See Stopping Robocalls from Rachel at Cardholder Services for a longer description of NCID.

I recently got an email purportedly from my own account that began with “This Account Was Recently Infected!’ The full email is shown as an image below with the text in the description tag of the image reference. The text was contained in an an image file and since it spoofed my own account, my email client displayed the image. Concerned that my account had been hacked, I looked at the email source, and discovered that it was just a spoofed email originating from a server in Japan. I Googled the first sentence and found many hits for descriptions of the email scam and one that suggested reporting to the FBI.

Because it included a Bitcoin wallet ID, I decided to go ahead and report to the FBI. Finding the right site is not a trivial task, but I did end up filing a report.

The extortion email was presented as an image, which allowed it to get past SpamAssassin and the spam filtering in Thunderbird. It also made it impossible to cut and paste the Bitcoin wallet ID into the FBI report.

Headers from the Extortion Email

In most email clients, you can view the source of the email which will give you information on where the email may have originated. In this case, the header shows that the email started out in intercom-45-29.pro which does not point to anything in DNSLytics, but intercom.pro does point to Russian ownership. From the first server, it went to max-luomo.com which is registered with a Japanese domain registrar. In any case, it is clear that the sender did not compromise my email account or server. 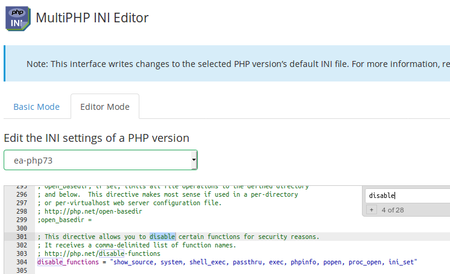 PHP 7.3 was released in December of 2018 at about the same time that PHP 7.1 moved to support for security fixes only; PHP 7.2 is the primary release, but 7.3 offers some incremental improvements. PHP 7 was claimed to be about a 2X performance improvement over PHP 5.6, and each release of the 7 series claims performance of 5-20% better than the previous release. CPanel announced that EasyApache 4 added PHP 7.3 in December, so I decided that three months was enough time for many of the problems to be worked out and took the plunge on moving to 7.3; it went fairly easily.

As always, make sure that you have backups before beginning any system level work.

As always for a PHP upgrade, make sure that both Joomla and all extensions are current and that you are on the current release of Joomla.

If you have a VPS, you will need to log in to Web Hosting Manager and add PHP 7.3 in EasyApache. It will prompt you to include the PHP packages that are used in the other versions of PHP; say “yes” unless you know that you no longer need some of the packages.

If you do not have a VPS, PHP 7.3 may be available in the Multi-PHP settings within CPanel. If not, call your web hosting technical support to make sure that it is added. This will probably take a day or two, and may be much longer.

You will need to update the PHP configuration so that it matches the settings for your working PHP 7.1 or 7.2:

Turn on Error Messages in Joomla

If everything goes perfectly, you will not need error messages, but it will be easier if you turn this on before switching over the first time. If you do not turn it on now, you will have to log in to Joomla each time you switch PHP versions (assuming you are using PHP sessions for performance).

Once you have done all the prep work, switch to PHP 7.3 and test everything on your site. If you have extensions for managing photo galleries, make sure to test these; some of them are dependent upon PHP modules that are not installed by default.

Turn off Error Messages in Joomla

Once you are done, make sure to turn error messages off in Joomla. You will probably still get a number of warning messages, but no fatal messages.

If you are current on Joomla maintenance and have already switched to PHP 7.1 or 7.2, moving to 7.3 should be a relatively painless. The most likely problem area will be forgetting to change a memory settings.